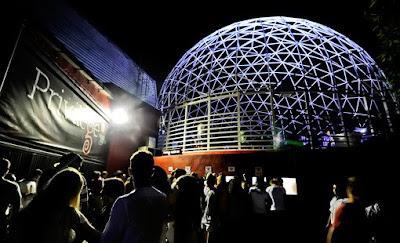 Ibiza is famous for its outstanding nightlight with a wild party reputation, and Privilege stands for what Ibiza clubbing is all about and more.
Privilege, which has officially been named as the largest club in the world, is situated in the centre of Ibiza and we wouldn't have it any other way. The biggest club in the world, in the party capital of the world, with a staggering capacity of 10,000 people - now that's the definition of a superclub!
Formerly known as Ku, this legendary club has been the stage for some of the most magnificent events and unforgettable memories from the dancefloor at parties such as the famous Manumission, La Troya or more recently SuperMartxé.
From Ibiza residents to celebrities such as Grace Jones or Freddie Mercury, everybody was either dancing at or talking about the biggest club in the world, and rightly so.
After many years of success, Privilege continues to bring tremendous energy and powerful season line-ups.
A superb set of world-class techno artists continue to keep us raving all night. Party long enough and you'll witness the spectacular sunrise that gleams through the huge panorama-view windows in the Vista Club, also known as the clubber's paradise - what a vision!
This year we can confirm the news everybody has been waiting for. The wildly successful Resistance residency has announced that it will return home to Privilege every Tuesday from 17 July to 11 September, with Carl Cox, Jamie Jones, Joseph Capriati, Loco Dice, Maceo Plex, Richie Hawtin and many more preparing for the 9-week
roster