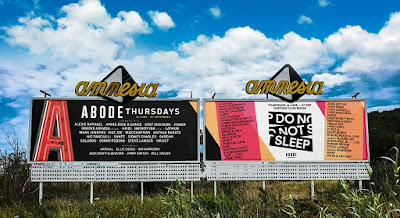 This year, ABODE stands alone to take over the Thursday night spot at Amnesia Ibiza.
ABODE has taken over the London house and techno scene and is now making waves across the ocean and setting up camp in Ibiza. Last year, ABODE was in charge of the Terrace in Amnesia and DO NOT SLEEP were in the Club room.
This year, the musical empire built by a tight-knit crew of resident DJs has called upon an extraneous roster of house music heroes for its 2019 campaign, where they will be in charge of the entire venue.
Every Thursday from 6 June until 26 September, the British Brand and dancefloor expects will rock the San Rafael super-club. After an incredible debut last season, we have no doubt that this year will be another smash hit.
ABODE's success story comes from having a combination of strong resident DJs and big-name bookings that create ultimate line-ups and a tasty menu of versatile house and techno tracks.
This year's line-ups include resident GW Harrison, Ellie Cocks, Will Taylor and Artikal, as well as Alan Fitzpatrick, Cassy, ​​Quarter, Erick Morillo, Gorgon City, Guti (live), Hector Couto, Mambo Brothers, MK, Richy Ahmed, Skream, Steve Lawler, Yousef and many more.
That's right, two ginormous rooms filled with a sizeable fanbase and the sweet sounds of banging house beats blasting through the impressive speakers and new and improved sound system.
It does not get much better than that.
Get your tickets now!

BUY THE TICKETS FOR THE THURSDAY'S PARTY